First up, Happy New Year everyone! May 2018 make all your dreams come true. Except for the weird naked ones. (Unless you want them to…)

Second up, in February I’m teaching my first courses since I became a mama. I’ll be teaching folks at Quad in Derby how to write SF, horror, and fantasy, and how to create fantastic plots and characters. Tell your friends!

Third up, I’d like to share with y’all a few thoughts I’ve had lately about the topic of fandom. There has been a lot of discussion in the last few years about fan entitlement, and fans’ attempts to change things they don’t like. The latest iteration of this is the petition by some Star Wars fans to try and get The Last Jedi movie excommunicated from the canon of the Star Wars universe because they didn’t like what the film did with Luke Skywalker. Meanwhile, many Harry Potter fans were vocally annoyed about the failure of Magic in North America to address crucial aspects of American history, and – more recently – about the continued presence of Johnny Depp in the Fantastic Beasts franchise.

These attempts to change things about beloved franchises can sometimes seem misguided – the originator of the Star Wars petition has now backtracked on the idea. But they show the depth of passion people feel about their favourite things, and if that’s sometimes uncomfortable for the creator, so be it.

Independently of all this, I was recently involved in a discussion on the Fantasy Faction Facebook group on the topic of fanfiction. Some people were pro, some anti, but what struck me most was the number of people who said something like ‘fanfic is fine so long as you don’t make the characters gay. If I wanted Character X to be gay, I’d have written him like that in the first place’. Which, well, anyone who knows anything about fanfic will tell you that making the characters gay is frequently the entire point of the exercise (see my own previous comments on the topic). And also, I feel these authors are deluded if they think they can control what fans do with their characters.

Once a book, or a movie, or whatever, is out in the world, then you as the creator to some extent lose control of it. We have copyright laws which mean people can’t just rip it off, but you can’t really predict or govern fans’ reactions. They might love it, they might hate it so much they start a petition to have it wiped from the face of the earth, they might decide it’s great but would be that *little* bit better if Harry ended up with Draco instead.
Various authors have tried in the past to exert a greater measure of control over their works’ reception, probably most famously Anne Rice, who has expended a great deal of effort trying to put a stop to fanfic of her Vampire Chronicles series (incidentally, there are currently 757 VC fanworks on Archive of Our Own, most of them gay). She also responded to poor reviews of one her books by posting a long rant on Amazon. Needless to say, this didn’t endear her to many.

My take on all this is simple: I would love it if people felt passionately about something I’d written. Maybe I wouldn’t agree with the direction of their passion, but hey, it’s their passion. Creators can start the fire – they can’t stop it spreading.

Lately, I’ve been seeing a few arguments, in various corners of cyberspace, about what it means, or doesn’t mean, to be a fan of something – should you buy the special editions, read the fan fic, wear the T-shirt? Who are the true fans? How can you tell them from the fake? Who is, or isn’t, permitted to be a fan of a particular thing? How should a real fan behave in the face of criticism of their beloved book/franchise/medium/pseudo-religion? Can you be too into something?

As is often the way with online arguments, a lot of this discussion can get quite… emotional. Here, for posterity, is my humble contribution, in the form of a handy five-point fan manifesto.

1) You can be a fan of whatever the hell you want, as passionately as you want. Ain’t no such thing as a guilty pleasure baby. It doesn’t matter when you were born, where you live, what you look like, which school you went to, who you dream about, what colour your hair is, if you piss sitting down, if you piss standing up, or who you are on a Monday morning. If you love something, you love it, and nobody can tell you otherwise.

2) There’s no right or wrong way to be a fan. You can be obsessive, you can be casual, you can be anything in between. Everyone started somewhere, after all. Watch the movie but don’t read the book. Write the slash fiction but don’t watch the show. Play the Android game but don’t buy the box-set. Wear the T-shirt just because you think it looks cool. You can read/watch/play/wear/write/listen/draw/consume/squee over whatever combination of stuff appeals to you, and if someone else thinks you’re weird because of it, that’s their problem, not yours.

3) Sharing your passion with others is great. Discussing passions with others is also great. Telling someone they’re not a ‘real’ fan because they don’t accept your headcanon, or they ship the ‘wrong’ couple, or you don’t like their cosplay, or whatever other reason… I think there’s a term for that. Oh yes, that’s right, it’s called Being A Dick. Don’t do that, people. 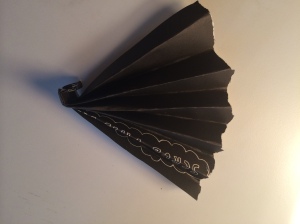 Is this a real fan?

4) You can not be a fan of whatever you like. Everybody else likes something else – so what? Doesn’t matter what those Amazon algorithms say, not everyone who likes X has to like Y. Deal with it.

5) It’s possible to love something, but not love every single thing about it: to find certain parts of it troubling or distasteful, or just not as good as the rest of it. It’s even possible to hate some aspects of it; just as you can love a person deeply, but hate their alcohol problem. Acknowledging problems with something you love isn’t weakness, it’s maturity.

And if someone criticises something you love, it doesn’t necessarily mean they hate it, or hate you, or that you should hate them. Everyone is, after all, entitled to their own opinion, and sometimes the greatest fans can also be the harshest critics.